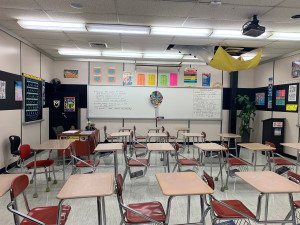 Air quality tests reveal that the air in HNHS does not meet state standards.

Most Huntington University students, including myself, didn’t attend Huntington North High School. We have all chosen, however, to live in the Huntington community while we pursue higher education. We’ve all invested in this community to some extent; some of us support local businesses, some of us find a church family here, some of us vote here, and some of us will choose to move here after graduation. In short, for some of us the city of Huntington has become home.

In our home, children are forced to breathe air that fails to meet state standards and has caused respiratory illnesses.

After enough high school students fell sick due to respiratory illnesses, two doctors contacted the Huntington County Department of Health to voice their concerns. The state became involved and conducted an air quality test on October 1st. Sure enough, the levels of carbon dioxide and humidity within the school were much higher than the state recommended levels in certain areas of the building, according to WPTA 21.

In the recent election, Huntington voters had the opportunity to consider two school referendum questions on the ballot. If passed, these referendums would increase property taxes for eight years to pay for a new school building, with safe air.

A more recent test of the air quality in the building was encouraging — there was improvement in the levels of carbon dioxide and humidity. Without any long-term fixes, however, it is difficult to be sure that another disaster will not happen. Although there is not currently a plan in place to fix the school, mayor elect Richard Strick stated in an interview that students need to have a “top-notch educational facility,” and that this is a priority.