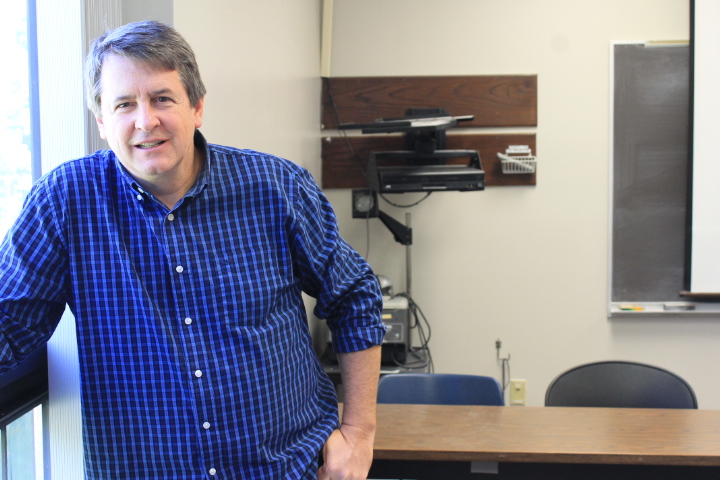 Journalism and teaching have always been written in the stars for Kevin Miller.

As a boy, Miller loved the news. He even started a small paper of his own in which he reported and wrote news for his hometown.

“I gravitated towards journalism when I was very young,” Miller says. “I started creating these mockup newspapers trying to pretend I was the editor doing the news for Rosedale, Ohio.”

That love of writing stayed with him as he went for an undergrad in writing at Eastern Mennonite University and a master’s in journalism from Ohio State University. Along with journalism, Miller also holds a Ph.D. in communications from the University of Kentucky.

While earning the masters in journalism, Miller interned at newspapers and ended up getting a job at Christianity Today magazine.

“I did the masters in journalism and some newspaper internships,” Miller says, “and eventually I went to Christianity Today magazine, where I was an editor and reporter.”

While editing and writing for the publication, Miller took teaching as a side job.  With a little encouragement, he decided to pursue this as his main job.

“When I was at Christianity Today, I began teaching writing at Wheaton college on the side as an adjunct professor,” Miller says. “I enjoyed it a lot, and I had a good response from students. The department chair talked to me once and said, ‘Maybe you should consider teaching.’”

And that’s exactly what he did. Miller is now the head professor of journalism in HU’s communications department. He loves teaching, and he does it in a way that truly works for himself and his students.

“My philosophy of teaching is one that is constructivist,” Miller says. “If I hand you knowledge, you won’t learn it deeply, but if I give you the opportunity to construct knowledge in a certain field, you will have integrated that knowledge rather than just received it and quickly forgotten it because it becomes relevant to you.”

Overall, Miller just loves giving students the feeling of overcoming obstacles they never thought they could.

“I loved empowering students, like when the light came on in their eyes and something that looked challenging or difficult all of the sudden seemed doable,” Miller says. “That’s what motivated me after I taught my first class — that moment when students’ eyes came alive.”

In the long run, Miller wants to have taught his students to be able to think critically using the knowledge that was passed on to them.

“What I hope to leave is a habit of the mind,” he says, “a shaping of the mind that allows you to continue learning, continue asking critical questions and continue seeking creative solutions to issues globally or in our society.”

0 comments on “The Making of Miller”