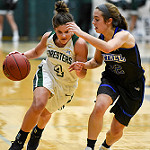 After finishing in the middle of the pack last season, Huntington’s women’s hoops team is hunting for a better finish this year. At 16-14 (9-9 Conference), Huntington will look far beyond a .500 record, returning some star talent from last year’s season.

The Foresters return a top 10-scorer in the conference in Sarah Fryman, who averaged 14 points per contest last season. Maddie Richter returns to the squad as the number one shooter from beyond the arch at 46 percent, and Brooke Saylor added nearly 12 rebounds per contest, which was good for second best in the conference.

Not only do returning key players from last season help statistically, but they also help underclassmen understand what it takes to become one of the top players in the league.

“Having an experienced roster is one of the several ingredients needed to find success in the Crossroads League,” says head coach Lori Culler, who is entering her 33rd season as the leader of the program. “The level of competition is such that it is very difficult to win consistently if you have to rely on freshman and sophomores to carry you.”

Fryman says the team has a key vision this year.

The goal is certainly realistic, and very clear, but it will be tricky to accomplish with three teams last season finishing in the top 25, the top being Marian, which ranked fifth at the end of last season. The others are Taylor and Indiana Wesleyan, both of which are no slouch. All three of those teams will have to come down to Huntington this year, and will have some epic battles that you will not want to miss. Check out http://www.huathletics.com/ to find out more information on schedules, rosters, games and more on Huntington Foresters athletics.