Christiana Hicks, a well-known name around the university, may just become the world’s next star.

The 2017 alumna recently announced that she auditioned in front of celebrity judges Adam Levine, Kelly Clarkson, Jennifer Hudson and Blake Shelton on NBC’s “The Voice.”

During Hicks’ time at Huntington University, she led worship alongside the Joyful Noise team every Tuesday and Thursday in chapel. Her passion for music shone heavily through her worship styles. 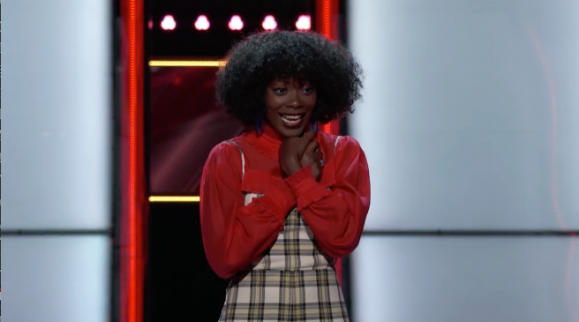 She entered into the annual talent show, Davis Hall Follies, several times and placed top three each time, giving a rendition of a popular song and an encore at the end. Her performances were a fan-favorite.

Hicks was a Frontline Forester, Horizon Scholarship recipient and a track star at HU. She graduated with a degree in social work and was a face that all students recognized and enjoyed. Her bubbly personality brought life to the campus.

In a spring 2017 “graduation edition” of The Huntingtonian, Hicks disclosed that she would be taking a year to focus on her singing and musical pursuits.

As she noted in her announcement of the audition, it has been “cooler than expected.”

“The Voice” is a hit TV show that features “blind auditions” in which a singer performs with the celebrity judges’ backs to them, only listening for talent. Once a judge hears something they like, they press “the button” and turn around. At the end of the audition, each performer chosen gets to choose which team they would like to join based upon who turned around.

Hick’s Instagram page was recently transformed and wiped of all photos that were not direct head-shots or “selfies,” and her name was changed to “@Christianadofficial,” which has Huntingtonian staff members speculating that big things are on the horizon for this young woman.

In a recent advertisement for the show, published on YouTube on January 29, Hicks is shown briefly with an over-the-top and excited look as if something big occurred. In another promo, Hicks is shown with the same look after Levine says, “you’re one of the best singers I have ever heard in my life.”

At Huntington, we would’t disagree. While it is unknown that the comment was directed toward Hicks (due to editing), we would not be surprised if it were.

While Hicks is not allowed to disclose any further information than her audition, we are hoping the best for her journey. Stay tuned for viewing parties at HU so that you can watch what happens next for Christiana Hicks.