“The girls believe that they can do it,” states assistance coach Joann Green. “As a unit, we believe we can do it, and that feels good.”

Senior Hailey Krewald is thrilled to be receiving votes. Even though they have lost a lot of close games this year, the team is sticking close with those topped-ranked teams.

“It feels awesome receiving votes and being ranked number fourth in conference play,” Krewald says. “It shows that all of our ha

rd work is paying off, and it pushes us to work even harder to hopefully get ranked.”

As a senior leader, Krewald wants to be a team that always pushes each other further than they have ever gone before — whether that’s on the court, in the classroom or with their faith. 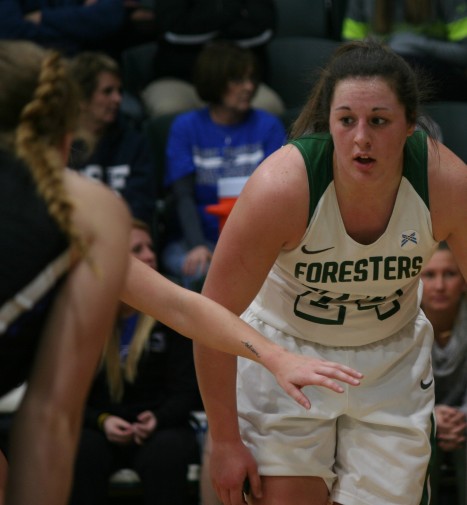 Basketball is more than a game for Krewald. She says it is a way for her to gain many relationships and lea

“It has helped develop me into the person that I am today,” Krewald says. “I define that as success.”

When defining what success looks like as a team, the girls characterized success as: growing in their faith, loving each other and applying it to others outside the team, and having consistency in areas that they can control, like attitudes, composure, and effort.

“There was nothing on that sheet of

paper about wins and losses that define our success,” head coach Lori Culler says. “We obviously want to win a lot of games, but it is not the most important thing.”

As the team is finishing up their last few conference games, they are working harder than ever. The coaching staff looks at the schedule and bases it off of who they play next and what they need to focus on based on the first time that they played that team.

“We bring in some guys to help ensure that our girls are getting in a good workout, but that they are also going up against some hard competition as well,” Culler says.

The HU women’s basketball team had their final conference game on February 17 against the Mt. Vernon Nazarene University Cougars. The Crossroads League tournament started on February 20.

We pay our student writers and artists $20 per article/comic. Students can join at any point in the school year. Email the editor-in-chief to learn more.