HU president Sherilyn Emberton was, as expected, overjoyed at this donation.

“A gift of this magnitude enables Huntington University to remain strong as an institution focused on educating and equipping men and women to make an impact in this world for Christ,” she said in an online press release.

The funds will directly benefit the Haupert Institute for Agricultural Studies and other academic programs. Boren’s background as a farmer made him especially interested in Haupert Institute, but the potential that he saw in HU as a whole ultimately persuaded him to donate.

“I believe in the mission of Huntington University and have confidence in Dr. Emberton as she leads the University into great success in the years ahead,” Boren said. 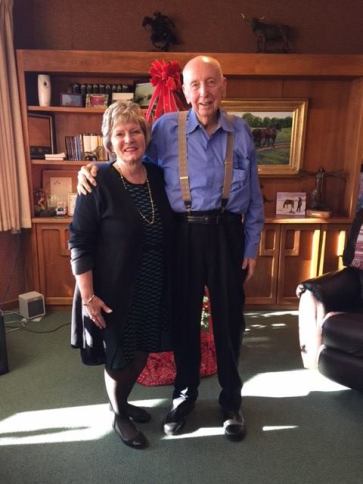 Boren and his late wife, LaRita, have a long history of supporting private higher education institutions that equip younger generations. Having graduated from a number of private and public Indiana universities, they have long understood how a higher education can benefit young Christian adults.

Aside from his farming experience, Boren has also distinguished himself in life as a successful businessman. He is currently the chairman and chief executive officer of Avis Industrial Corporation and president of PHD Inc., each of which operates at an international level.

It is Boren’s Christian faith, however, that inspired him to send this money to Huntington University.

“He was just so gracious,”  Kay Schwob, senior director of advancement operations, said.

She met with Boren to accept the gift.

Schwob was struck by Boren’s down-to-earth nature and evident love for Christ. Other people asked her if she was nervous to receive the $1 million check from Boren, but she shared that her meeting with Boren was faith-centered and comfortable. They spoke about their families, talked about Christ, and concluded their meeting by praying together.

“It was like we were old friends,” she said.

Boren’s generosity will undoubtedly enrich the academic careers of hundreds of HU students, but perhaps there are more positive ramifications to be considered. God, after all, is always moving in the everyday lives of humans, and Schwob believes that he has been especially present throughout this donation process.

She felt honored to be the person to receive the check from Boren, stating that “it could have been anyone.” She believes this was not a coincidence and that God is doing something much bigger through this donation.

In addition to the $1 million check, Boren’s secretary gave a jigsaw puzzle to Schwob. That jigsaw puzzle, she believes, was God’s way of indicating that he was at work.

The puzzle pictured Red Cloud, a Native American chief of the Oglala Lakota people who lived in the late 1800s and early 1900s. Incidentally, Schwob’s great-grandfather was the first non-Native American to receive land from Red Cloud himself on the Oglala Lakota reservation, where he and Schwob’s grandfather ran a general store and traded with the Native Americans. To Schwob, the puzzle echoed a special financial transaction that is particularly special to her, which she believes speaks volumes.

“It could have been any puzzle,” she said. “That’s not a coincidence. To me, that’s providence. That was the Lord putting me in that spot when he did to be ale to receive the gift that [Boren] gave us. To me, it was such a blessing that I was there to be able to receive it because it was bigger than me. God is definitely at work.”