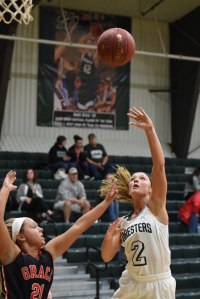 When the final buzzer of the Foresters’ season sounded in the Crossroads League tournament semifinals Feb. 24, it not only brought the women’s basketball team’s season to an end, but also Miranda Palmer’s career.

In her four years, Palmer accumulated an astounding 2,173 points—averaging 17.1 points per game to become the program’s most prolific scorer. She also holds the university record for most points in a game (48) and and most made field goals in a game (18).

At the conclusion of her senior season, she earned NAIA First Team All-America honors and was named Crossroads League Player of the Year.

Sports fans would be hard-pressed to find a more humble player of Palmer’s caliber. When asked about her legacy, the 5’6″ guard said she hopes what she accomplished on the court comes with a disclaimer.

“I wish they would just put a little insert on the banner (in Platt Arena) that said: ‘She was in love with basketball, so she played it all the time and ended up being somewhat decent.’ Really, nothing would make me happier.”

As much as Palmer tries to shy away from her success, others have been unable to over the last four years. A member of the all-freshmen team in 2013-14, she found herself on the conference first team each year following. The NAIA committee placed her on the second team as a junior, and she collected honorable mention recognition as a sophomore.

Palmer said her love for the game and drive to improve encompasses her time as a Forester best.

“I’ve always wanted to see how good I could be and be better than yesterday’s or last year’s Miranda,” she said. “I don’t know if that’s a legacy, but it’s going to be mine. We could be redefining legacy.”

They say it takes a village, and for Palmer, her family and coaches were the support system she needed to translate her hard work into success on the court.

Palmer said the pairing was natural because they’re equally competitive. Their father/daughter bond was strengthened over hours of rebounding in the gym after practice and conversing about shooting form and other aspects of the game.

“Without him I wouldn’t be half as good as I was,” she said.

During the recruiting process, head coach Lori Culler was the factor that pushed Huntington to the top for Palmer.

“I knew she was a genuine person and really cared about people,” she said. “I also knew she was competitive, and I thought ‘Wow, I would love to play for that woman!'”

Once on campus, Palmer said the coaching staff provided “a mix of everything” that made her confident in their love for her on and off the court.

One of Palmer’s favorite memories in forest green and white was Culler’s 500th win. It came in exciting fashion—a home victory over the defending national champions Indiana Wesleyan.

“I made a big shot at the end of the game that sealed the win,” Palmer, who was a freshman at the time, recounted. “I didn’t know how big of a deal it was at the time.”

Palmer also highlights conference tournament victories over the hosting Wildcats as some of her favorite career moments. The Foresters topped IWU in the semifinals her freshmen year by 19 to advance to the championship game. Most recently, Palmer led all scorers with 26 to guide HU to another tournament win against Wesleyan.

All of these accomplishments divulged from what Palmer said were few goals for her time at HU. After a successful high school career, she said she “just happy to have locked in four more years of basketball.” From there, she continued to do what she knew—putting in hours in the gym.

“I hadn’t really thought that far ahead before and then it was happening, and I was just trying to adjust,” she said.

Palmer said her focus on basketball started when she assumed the role of ball girl for her high school as a fifth grader.

“I knew what hard work looked like and of course, being me, I wanted to work harder than I had seen anyone work to maybe make myself a little bit better than what was expected of me,” she remembered.

Around that time, Palmer began playing AAU, fixated on becoming the high school players she wanted to be.

“I always knew I wanted to play in college, but my goals were focused on my high school career,” she said said. “Everything I did in the time between 5th and 8th grades was focused on how I could become good enough to start varsity as a freshman. I was obsessed with it!”

Palmer averaged 22 points her senior year at Arcadia High School and earned player of the year honors after leading her team to a conference championship and appearance in the regional final game in OHSAA state tournament.

As Palmer plans her exit from HU, the impact she’s made on the campus is apparent. However, one of the biggest takeaways she’s received from her time as a Forester is the integration of faith.

“Coming into college I thought I was a Chrsitian because I went to church and called myself one,” she said. “Then with our basketball devotions and all the spiritual growth opportunities through chapels, the church I started going to and just everyday conversations here at HU, I have really gotten a glimpse of what it looks like to live a life devoted to Christ.”

Palmer said she trusts this will guide her in wherever her next steps are.

“I now have an understanding of what a relationship with Christ really looks like and should be like,” she said. “My faith has grown a lot personally, and I have come to desire a life that looks how God wants it to look.”