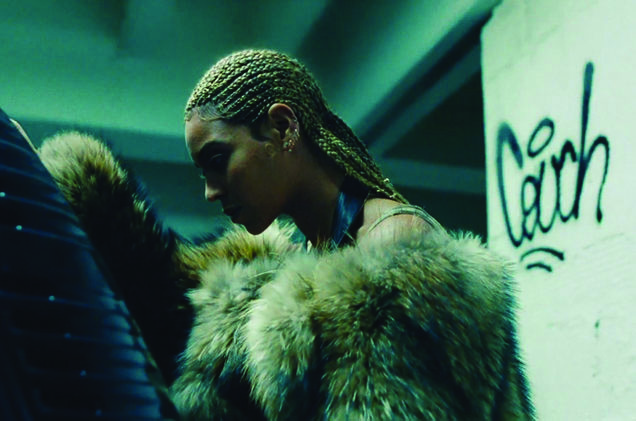 Beyoncé is back with more vocal power than ever before. “Lemonade” is a powerhouse of strong melodies, bold statements and deep artistic interpretation and highlights Black rights, resentment and relationship controversy.

The first song of the album, “Pray You Catch Me,” immediately pulled at my heartstrings. Beyoncé sets the tone of the entire album with emotional tone, remorseful vocal inflection and drawn-out lyrics. The album then smoothly transition into “Hold Up,” my personal favorite.

“Hold up, they don’t love you like I love you” and “Can’t you see there’s no other man above you, what a wicked way to treat the girl that loves you” are a few of the lyrics that hint at Jay-Z allegedly cheating on her. In the visual album — which I highly recommend watching — Beyoncé walks through city streets with a baseball bat while dealing damage to shop windows and parked cars. The way it’s shot elegantly beautifully captures her rage and anger.

It’s obvious, though, that she is indicating something deeper — some pain inside of her seems to motivate her actions and lyrics throughout this song and the rest of the album. These sentiments allow for Beyoncé to deliver her lines in such a raw and tempramental fashion, pulling the listener in more with each syllable.

As if Beyoncé wasn’t talented enough, she throws a country-esque style song into the mix. The song “Daddy Lessons” has a New Orleans and country-road feel. She sings about her father teaching her how to resolve her problems with a gun. She trills while hooting and hollering persists in the background, setting the listener in a hoedown-style arena.

Maybe the most well-known song on the album, “Formation,” provides the most purpose. Beyoncé sings about Black culture and pride. “I like my baby heir with baby hair and afros. I like my negro nose with Jackson Five nostrils” are lyrics reflecting black women who have faced discrimination. It’s a bold statement — a controversial one — but it’s real.

Every song is ambitious and convicting. This authenticity allows listeners to empathize with Beyoncé, feeling more like a part of the album and less like a bystander. Synonymously with the visual album, the audio album goes through the five stages of grief. Each portion of the album lines up with the varying stages, telling a final story that lasts an hour long.

“Lemonade” is an artistic masterpiece in every sense of the word. She is honest, real and genuine, all while delivering unembellished passion and transparency. The artistry permits audiences to feel what she feels. “Lemonade” is an undiluted craft — nothing more, nothing less.

Cody Melin is a junior broadcast fusion media major. This review reflects the opinion of the author only.

0 comments on “REVIEW: ‘Lemonade’ is packed with an emotional punch”