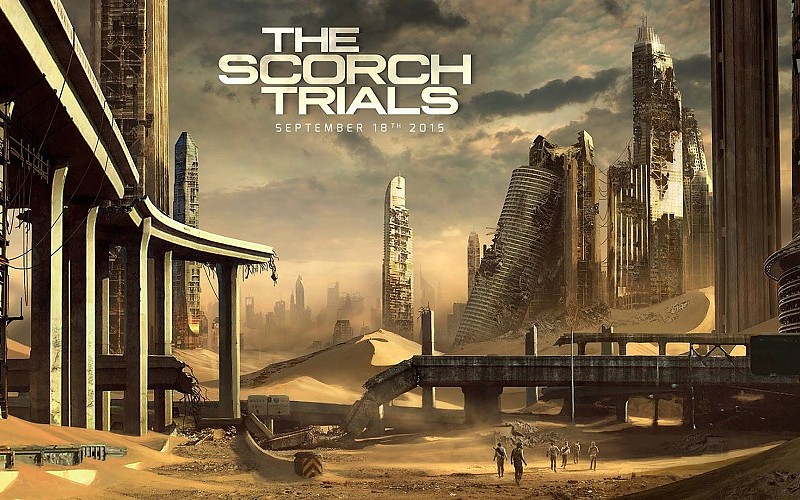 I’m going to start this review of “The Maze Runner: Scorch Trials” (2015) with a disclaimer: I have never read the book series. I’m usually that

girl in the theater who has the book series down pat before punching my movie ticket, but that isn’t the case this time. So, book fans, know I respect you, an

d that yes, it is very likely that the book was better than I make the movie out to be.

After watching the first installment this summer, I was excited to catch up with Thomas and his friends following that emotional ending. Luckily, “Scorch Trials” picks up right where ‘The Maze Runner” left off — Thomas and crew after their rescue from imprisonment in the maze. WCKD, a scientific group seeking youth for experiments, had held the boys and lone female Teresa in the maze in an attempt to control them, the few immune to a rampant virus.

The group appears to be in a safe zone, protected by anti-WCKD Mr. Janson, but it’s not long before newcomer Aris brings to light some sketchy on-site lab work. Thomas, being the protagonist he is, wrangles the group together and uses all of their skills to escape Janson and his conspiracy.

From this point on, out in the unfamiliar “Scorch,” Thomas and company encounter countless tribes of infectious cranks, which are essentially zombie-like forms, as they search for a rebel group coined The Right Wing. The escapees, however, quickly become familiar with the area – thanks to a reliable (and tedious to watch) routine of dark-hallway-after-long corridors full of contagious zombies. The film essentially takes its audience, along with Thomas, from one location to the next, an understandable, but somewhat boring, function for an installment in the middle of a series. Just buckle yourself up for a long ride on the rising-action train. *checks phone and can’t believe they’ve been battling zombies for 30 minutes*

Good news: When the train finally arrives, the climax has a satisfying and fairly unpredictable twist that nearly justifies the wait. Despite my continual mental comparisons to other dystopian films while watching, I can’t criticize 20th Century Fox for cashing in on the recent success of these types of films. Many moviegoers – myself included – continue to fill theaters to watch the newest dystopian movie. Even though I can’t put “Scorch Trials” up with the likes of “The Hunger Games,” you’ll likely find me back in the same seat for the next installment. I guess that means “Scorch Trials” did its job.

Gina Esenhunt is a junior journalism and public relations double major. This review reflects the views of the writer only.

1 comment on “REVIEW: ‘The Scorch Trials” is tedious but enjoyable”